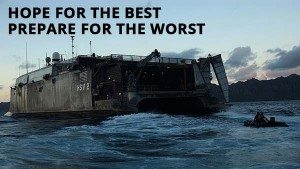 0407010-N-6932B-016
Pacific Ocean (July 10, 2004)ÑCrewmen assigned to Naval Special Clearing Team ONE (NSCT 1), approach High-Speed Vessel Swift (HSV 2) to be hoisted aboard after deploying an unmanned underwater vehicle during the first of a four-phase clandestine mine clearance training exercise as part of exercise Rim of the Pacific (RIMPAC) 2004. RIMPAC is the largest international maritime exercise in the waters around the Hawaiian Islands. This year’s exercise includes seven participating nations; Australia, Canada, Chile, Japan, South Korea, the United Kingdom and the United States. RIMPAC is intended to enhance the tactical proficiency of participating units in a wide array of combined operations at sea, while enhancing stability in the Pacific Rim region. U.S. Navy photo by Photographer’s Mate 2nd Class Richard J. Brunson