I’ve said it before, but I’ll say it again: Be prepared for anything.

Time and again, I learned this lesson during my days in the military. But one incident did more than any other to drill this motto into my mind.

It was a routine training mission that, in a matter of milliseconds, turned into an improvised medical evacuation – a rescue for which I earned the Navy and Marine Corps Achievement Medal.

It was July of 2004. Sunset. I was off the coast of Oahu, participating in one of the largest multi-national maritime exercises in the world, the “Rim of the Pacific.” Along with two other crewmen, I was manning an 11-meter Rigid Hull Inflatable Boat (RHIB) as a crane lowered it from a transport vessel into the choppy seas below. I was the chief navigator. 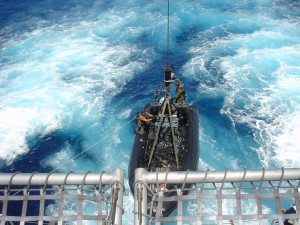 We were attached to the winch by four lines, two of which were designed to keep our boat steady as we were lowered into the waves.

As we descended, an uneasy feeling came over me. A sense of dread.

Moments later, one of the cables snapped and I shouted “Get down!” We all ducked, but one crewman’s hand reflexively shot over his head and the tops of three fingers were severed as the cable whipped past.

As soon as everyone realized what had happened, a medical crewman joined us in the boat. He provided first aid to our comrade and quickly retrieved the severed fingers, which he packed in ice. The hope was that the fingers could be surgically re-attached later. Unfortunately, the transport vessel didn’t have the personnel or facilities for such surgery, so our only recourse was to get our injured friend back to land as soon as possible.

That wouldn’t be easy.

A Storm Rolls In 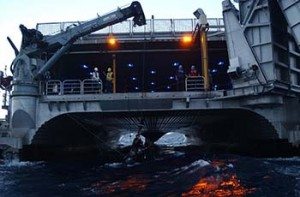 A thunderstorm rolled in and it started raining. We had navigation charts, which I used to set a course to land, as well as GPS. However, the seas around the island were a maze of coral reefs, rocks and other hazards. What’s more, it was getting dark and the size of the waves was growing, thanks to the storm.

To put it mildly, I had to be very careful. I could easily have thrown us in the water by hitting a reef or getting grounded in the shallows. More than once, I had to make sudden detours to ensure that enough water was underneath the craft. At times, even miles from shore, the water became so shallow that we could have taken a walk outside the boat.

There was also the thunderstorm to contend with. In addition to lashing rain, the seas went from choppy to swells of four to six feet. As we neared shore, the waves grew even higher: six to eight feet. Even if you’re relaxing aboard a gigantic cruise ship, you’ll feel swells that size, so you can imagine what it was like in a small boat powered by an outboard motor.

I was accustomed to operating in swells – either steering directly into them or directly away, but even so, ensuring we didn’t capsize required a lot of focus. We had to go fast enough to jump the waves, but not so fast that – if we didn’t clear one – the wave’s force would damage the boat.

I had waterproof bags to keep the navigation charts dry, but we were in such a hurry that they got wet. Two-thirds of the way through the journey, they shredded to pieces and became useless. Without them, I had to navigate from memory, recalling as much of my PIM (Plan of Intended Movement) as I could.

As we neared land, I also used two large rocks as landmarks. After navigating between them, I knew we had to hang a sharp left to reach our intended destination.

The journey seemed to take forever, but in reality, it took two to three hours.

In retrospect, it was a thrilling experience, but at the time, I was worried for my buddy. I wanted to get back in time to get the fingers re-attached. (Unfortunately, they could not be re-attached, but he retained use of the remaining parts.)

We ended up at a tiny dock in the middle of nowhere. When we arrived around midnight, an ambulance was waiting to take our crewmate to the hospital. The rest of us camped on the floor of a small building, and took turns on watch. In the morning, the first thing I did was check the boat, whereupon I discovered that the propeller had been damaged. I dove under the boat and replaced the damaged unit with a new one.

Be prepared for anything. That was my take-away from this adventure and my advice to you.

Most of you won’t face this exact situation, but you can prepare for other scenarios. Always keep a medical kit in your home or car, as well as an emergency “Go Bag.” Real-world emergencies can happen at any time, so it’s important to prepare for the worst. You never know when you’ll have to be prepared with supplies and skills that could save you and your loved ones.