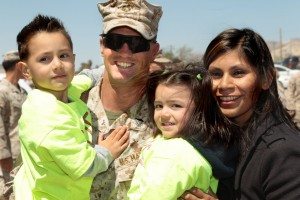 A returning service member greets his family during a homecoming ceremony. Courtesy DVIDSHub.

The migration home of hundreds of thousands of American service members signals a major shift in the homeowner market. Upwards of 750,000 service members have returned to civilian life since 2007, not to mention the one million veterans expected to return over the next five years according to a study by the U.S. Government Accountability Office.

The majority are combat troops returning from conflict zones in Iraq and Afghanistan, following the phasing out of peacekeeping campaigns. In addition, several thousand more service members will be routinely decommissioned from non-combat stations, mainly in Europe and Japan, as well as those stationed in domestic bases.

Because veterans own homes in a larger proportion than the rest of the nation (77.5% for veterans, compared to 65.1% for other civilians, according to Veterans United), it is likely that this influx of new civilians will mean a boom in homeownership.

Click here to see if you qualify for a VA home loan.

The VA home loan was established in 1944 to address the issue of permanent veteran housing, enabling veterans to finance a home, condominium, or home improvement with no down payment and comparatively low interest.

Because the loan is available to civilian veterans as well as active military members, there are over 22 million Americans that are eligible to apply. An increasingly popular option in today’s mortgage landscape, VA backed loans currently represent over 10% of the market for new homes (source). Using the VA Loan, countless returning veterans will have the opportunity to finance their own home

The VA home loan is an increasingly desirable option for veterans looking to buy. The biggest advantages over traditional mortgage financing include no down payment requirement and a higher likelihood of qualifying.

To qualify for a VA Loan, a service member or veteran–or the spouse of a service member who died while on active duty or as a result of a service-connected disability–must first locate a private lender. These lenders can pre-approve mortgages after figuring in factors of house income, credit, and local property tax.

Upon pre-approval of a VA Loan, the lender determines the amount the veteran can borrow. This amount will vary from state to state, where average home prices fluctuate.

Veterans often find themselves qualifying for VA loans, whereas they might not have qualified for more traditional home loans. This means that a VA loan is the only realistic route to homeownership for many veterans.

VA loans come with lower risk to lenders partially due to government backing. This makes VA loans easier and cheaper to obtain. The government guaranty also means there is no need for borrowers to pay monthly PMI premiums, or Private Mortgage Insurance, usually required by traditional mortgages when borrowing more than 80% of a home’s value.

See if you qualify for a VA home loan here.

Competitive rates prevail among VA loans, whereas most traditional mortgage rates are rising across the nation, many of which require 20% upfront down payments, expenses that often rule out cash-poor veterans.

Some VA loans require a one-year warranty from builders to ensure quality and safety for the veteran. The VA even offers financial counseling for VA loan holders who find themselves behind on their mortgage payments. These are options that appeal to many veterans, especially those struggling with finances.

Combine the hundreds of thousands of returned veterans with the benefits of the VA Loan and the American housing market is indelibly changed. As proof, look to the figures. Last year, the Department of Veteran Affairs guaranteed about 630,000 loans, an all-time high. That’s up from 2012’s approximately 500,000 and over four times the number of VA loans issued in 2008 according to John Bell, assistant director of loan policy at the VA.

In general, home ownership continues to appeal to veterans as a means of income, tax deduction, and security. Additionally, VA loans have proven their reliability, showing the lowest foreclosure rate for the last five years according to a recent study by the Mortgage Bankers Association

The tough lending climate of the last six years has led to very limited zero-down loan options. Yet veterans are one of the few demographics who are eligible for such a loan. The result is that veterans are turning out in droves to buy homes. As hundreds of thousands of service members return from active duty, it is likely that we will continue to see historic lending rates among veterans.

Apply for a VA Home Loan

Right now is a fantastic time to apply for a VA home loan. Rates are at historic lows. Often, buying a home with a VA loan is cheaper than renting the same home.

Get started on your homeownership goals by completing a short questionnaire here.