The men and women who serving on the front lines deserve more respect than we could ever give them. While we need to give respect for them, we also need to remember that there are countless other people and animals that are helping our soldiers. Communication teams, medics, and bomb dogs are just a few of the many factions of our military.

So many of us look towards the men and women serving on the front lines to be the heroes of our country. Well deserving of our respect, we forget that there are countless other people and animals helping our soldiers. Rico was one of those animals who helped. The dog served two full tours in Afghanistan and stayed alive through more than 30 firefights. Through all his dangerous missions, Rico not only kept himself safe but his Marine Staff Sgt. Russ Beckley Jr. safe as well.

After a year apart, the two were reconnected and brought home. Because of old age and a stressful life, Rico started to show signs of breaking down. After 12 years of life, Staff Sgt. Beckley decided it would be best to put him down. 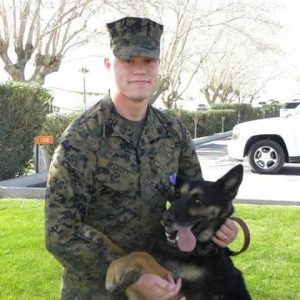 Beckley and his father (also a Marine) dressed in their Marine blues and put together a heartfelt ceremony. With an American flag over his coffin, the father-son duo respectfully laid their fellow Veteran to rest.  Several people from around town came to see the homemade memorial as the reality of his best friend being gone started to sink in for Beckley.

When we think of the military, we rarely think of dogs. Most people know dogs help but they never consider them part of the military. The truth is they are. They are every bit a soldier as the men and women fighting alongside them. However, they will do anything for their handler and team.