As I corkscrewed toward the earth beneath a tangle of parachute lines, a lifetime of reflection was compressed into just four seconds — maybe five. “I don’t want to die in the military,” I thought. “It’s time to get out and get on with my life. It’s time to raise a family and pursue my dreams.”

These thoughts may not seem very profound, but for me, they were an epiphany — a flash of inspiration that would soon change my life. At that moment, however, 45 seconds and a reserve parachute were all that separated me from life and death.

It had been a typical week at the base in San Diego — training, training and more training. I was 25 in the fall of 2005, a Petty Officer 2nd Class with over three years and 20 jumps under my belt in the Navy Special Forces (Special Warfare Combatant-craft Crewman). The landing zone that night was a dark field on the Mexican border. We often wore night-vision goggles on jumps after dark, but on this occasion we weren’t using them. But that’s not what made me nervous.

I was always a bit scared before a jump. Though this was just another training jump, I knew I was playing with my life. I was always aware of the risks involved, so the moment we boarded the C-130, my heart started racing. I may have been calm on the outside, but I had butterflies in my stomach, even though I knew what to expect.

En route to the landing zone, my buddies and I would be making small talk and telling jokes to lighten the mood. As we neared our destination at an altitude of 1,000 to 1,200 feet, my eyes would watch the signal to jump, waiting for it to flash red, yellow and then green.

We would attach our cables to the static line and the rear hatch would open. It’s very noisy over the shouts and wind until you jump, after which you hear only a “swoosh” — the sound of air rushing past you. You can’t see the ground but you feel yourself falling.

Then the static line deploys the chute. Suddenly, you’re yanked upward, which feels a little like getting rear-ended in a car. After that, you drift slowly for another few seconds before reaching the ground. 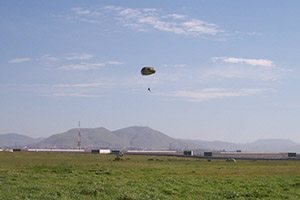 Rick Campos on a routine training jump very close to the Mexico border.

Two seconds later, the parachute opened. I felt a sharp pain in my cheek and thought, “Oh, there’s blood.” I looked up and saw that the chute was tangled.

It was then, spinning like a drunken ballerina, that I experienced an epiphany. My conscious mind was reviewing the past and projecting possible futures while my subconscious, groomed by years of training, deployed the reserve chute.

It wasn’t a pleasant feeling, but it was one of the most profound moments I’ve experienced. My brain was operating at light speed, taking just milliseconds to conduct analyses, draw conclusions and formulate plans that would have taken hours to explain aloud.

I was young when I enlisted in Special Forces. After joining, though, I came to realize that the job wasn’t what I thought it would be. I suppose you can say that about almost any job. What seems adventurous and glamorous from the outside becomes routine — even tedious — once you’re on the inside.

Don’t get me wrong: I loved what I did and I was proud of my accomplishments. Making it into Special Forces requires very strenuous and difficult training, something very few people can do. I felt like I’d become the “top one percent of the one percent.”

One hundred of us had started class to enter Special Forces, but just 20 graduated. Those of us who made it really earned our status as elite warriors. It didn’t matter to me that most people have never heard of SWCC, even though we endured the same hardships and training as the more celebrated Navy SEALS.

The Lesson I’m Passing Along: Don’t Wait to “Hit Bottom”

I’d done a lot of adventurous and risky things while in Special Forces, but I now realized it was time to leave. My original goal was to get enough money for college, as well as a sense of direction. That mission had been accomplished. It was time to acknowledge it and move forward.

This close call was the catalyst for what I’ve become today. It was a close call and a “wake-up call.” The incident reminded me that anything can happen at any time. You can walk out your front door and something bad can happen. Or something good.

For me, this near-death experience was THE moment that caused me to put my life into perspective and prioritize my goals. It was a lemons-to-lemonade moment.

My advice to anyone reading this is to spend some time — each day — reflecting on your life’s direction and your priorities. Consider what’s really important to you: where you are, where you want to go and how to get there. Do this before you literally or figuratively “hit bottom.”

I was given a second chance, but not everyone is so lucky.